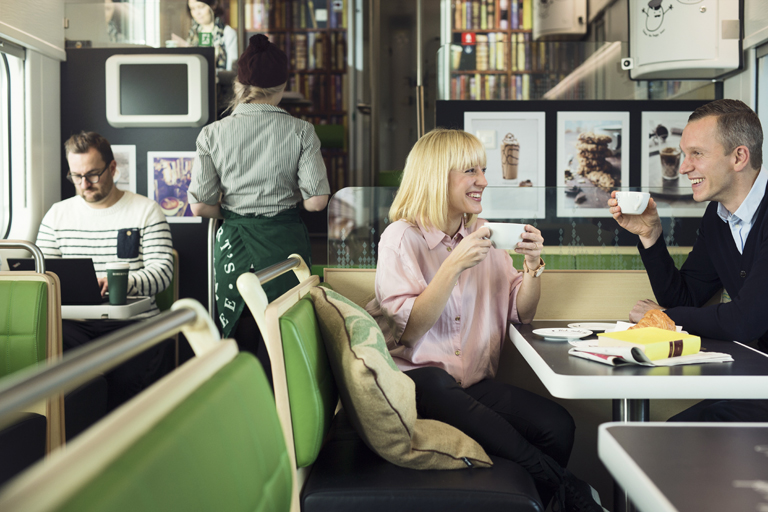 Avecra’s services cover both trains and stations. Around half of VR’s long-distance trains have either a restaurant car or a moving sales trolley. Restaurant cars feature warm meals, various cold and hot drinks as well as small savoury and sweet treats. The sales trolley has a more limited selection than the restaurant car.

Station restaurant services are offered by Avecra in seven different railway stations across Finland. Their services include fully-licensed á la carte restaurants and fast-food restaurants, which serve sit-down meals as well as takeaway food. Their fast service is a cornerstone of Avecra’s operations. In addition, the services include three varied Stop@Station kiosk that offer reading materials as well as food and beverages.

In the autumn of 2015, Avecra held co-determination negotiations and streamlined its administration and adjusted its operations in accordance with the company’s new strategic objectives. At the same time, it was decided to move the warehouse in Oulu to Tampere, where it can better supply passenger trains in the entire rail network. Avecra’s main warehouse is located in the Helsinki depot in Ilmala, in addition to a smaller warehouse in the Helsinki railway station.

Avecra is constantly developing its selection and customer feedback and surveys are utisiled in its product development.

In 2016, Avecra will focus even more on testing new concepts for trains. The goal is to utilise various trials for improving the comfort of trabel, providing new experiences for train travel and expanding the services that it provides.

Station services are developed alongside train services. The new Dixi station centre that was opened in 2015 in Tikkurila features a large variety of restaurant services. The product range in the restaurants, kiosks and cafes at stations is also being continuously developed while taking seasonal changes into account.