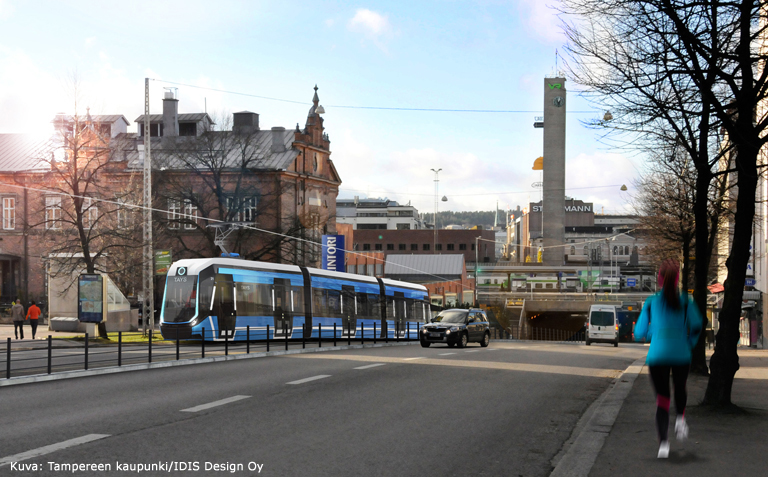 In 2015, VR Track was part of three infrastructure engineering alliance projects. The construction work for the first public alliance project in Europe, the basic refurbishing of the track section between Lielahti and Kokemäki that was begun in 2011 by the Finnish Transport Agency and VR Track, was completed ahead of schedule at the beginning of 2015. The project is now at its warranty phase, which will last until 2020.

In June, the consortium formed by VR Track, YIT and Pöyry was selected to implement the Tampere tram alliance project In October, the Finnish Transport Agency chose VR Track as its alliance partner for the Äänekoski bioproduct mill railway connections improvement project.

The tram line will connect Tampere's major living, work, education, city centre and central hospital areas. For a city that is growing strongly and steadily, the fast and reliable tram line will offer a good platform for developing its zoning and services.

The central operating model for the project is information model based production, where all planners and contractors have solid expertise.

In October 2015, the Finnish Transport Agency chose VR Track as its alliance partner for the Äänekoski bioproduct mill railway line improvement project. The project promotes the operational viability of the industry in the Äänekoski region and in all of Central Finland by significantly improving the operational reliability and safety of railway lines for the needs of increased railway transports.

In the development phase that began in autumn 2015 and continues until spring 2016, the alliance partners agreed on the more detailed scope of the project and its target costs, after which the actual construction work will begin. During the project, the railway line between Jyväskylä and Äänekoski will be electrified and improvements and basic repairs will be done to the line’s structures, tunnels and safety equipment. In addition, the tunnels and line structures between Tampere and Jyväskylä will be improved in certain spots. The rail line project will be completed for traffic in the autumn of 2017 and the warranty period continues until 2022.

The alliance model meets the needs of ever-more demanding projects

An alliance is strongly based on trust and commitment. Compared to traditional projects, more time is spent on selecting the companies that will participate in the project, and the process includes assessing the companies’ ability to work as a group and together. The selection criteria also include the capability, value production for the money spent and remuneration of the companies.

Alliance partners work together with a common commercial model towards a common goal and for the best of the project. In an alliance, the expertise of users, clients, planners and builders as well as any possible system suppliers are combined into one common organisation. The work practices of an alliance team include working together in a shared space, a Big Room.

All decisions on the implementation of the project are made together. The parties commit themselves to the target costs, with no additional or modification work. The contracting parties in an alliance share all the benefits and risks of a project, so that all partners either win or lose together. To maximise its benefits, the goal of the alliance model is to continuously improve performance.

The alliance model fits those projects where there are possibilities and risks. Typically the budget, timetable, political and social interests as well as technical requirements create challenging preconditions.

The early integration of expertise aims to solve any challenges in realising a project, to minimise the throughput time from the strategic decision to implementation, and to maximise the value the client receives for their investment.